The 2016 Annual Neighborhood Meeting was held Tuesday, April 26 at St. John the Evangelist on Humboldt St. Thank you to everyone who came out. We hope you found the meeting to be informative. We’ll continue to post updates to the projects that were discussed at the meeting here on northwinton.org and on our Facebook page.

Here’s an overview of what was covered at the meeting. 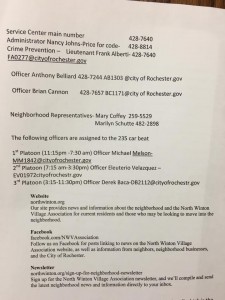 Captain Cuyler & Lieutenant Alberti spoke on the past year’s crime statistics and how to help the police keep the neighborhood safe, such as always calling 911 when you suspect a crime.

Captain Cuyler also mentioned that everyone should know at least five of their neighbors, before describing a person in North Winton Village who had uncovered an illegal scheme by checking with their neighbor.

“North Winton Village is down in crime. It’s a very good place to live.” 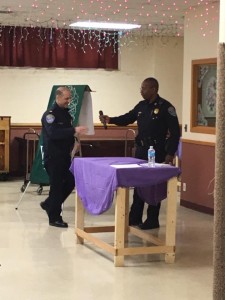 Road, curb, sidewalk, and lighting construction is now taking place between Corwin Rd. and Blossom Rd. Keeler Construction is doing the work for the City. They’re currently working on the water mains. The whole street is slated to be completed in October. Ripping out the old pavement and replacing it with new probably won’t begin until June.

Board members Marilyn Schutte and Bryce Miller spoke about ongoing neighborhood beautification efforts. They and many volunteers do a lot to keep our gardens and streetscapes looking great! If you’d like to volunteer, let us know at info@northwinton.org.

There are four projects in the neighborhood this year on Saturday, April 30.

Board Vice-Chair, John Coraggioso, introduced the new neighborhood business association, the Triangle Merchants Association, and he spoke about some new and pending development in our area, specifically noting some of our new businesses, such as Blossom Road Pub, Stout, Do or Dye Hair Salon, and Merchants Wood Fired Pizza.

We acknowledged Dorothy and Sunshine from the EMMA Neighborhood Organization for their efforts in cleaning up the neighborhood on the other side of Culver Rd. They are deeply invested in the area. “This is an area with rock solid people.”

They spoke about the proposed 80-unit housing complex on East Main St. in their neighborhood (near the Hillside building) and how they’re fighting it in favor of encouraging investment in the existing home stock and enticing new businesses to open in the area. The North Winton Village Association supports the EMMA organization in their opposition to the project.

NeighborWorks and the Triangle of North Winton Village

Neighbors from the Triangle area of North Winton Village spoke about the area’s partnership with NeighborWorks Rochester and all the good work that’s going on there, such as:

Board Treasurer Marilyn Parchus spoke about the North Winton Village Festival of the Arts, which will take place on September 17 this year (our 10th festival)!

Board Secretary Denise Speicher spoke about membership in the North Winton Village Association. Your $10 in dues go toward beautification, flowers & flower pots, maintenance of benches & banners, etc. Thank you to those who have already paid for this year.

Send your voluntary $10 yearly dues, or make a donation to support the association's work in North Winton Village.

Meet with representatives from the neighborhood association and the Rochester Police Department to discuss any neighborhood issues.

Interested in joining the board? RSVP to attend a meeting and see what’s involved.

Second Monday of the month

Our volunteers promote, organize, and conduct preservation, beautification, and cultural and educational activities to help improve the character and quality of the North Winton Village neighborhood in the City of Rochester, Monroe County.

Like the North Winton Village Association Facebook Page for fun and informative posts about the neighborhood and its businesses.

Promote, organize and conduct preservation, beautification, and cultural and educational activities intended to improve the character and quality of the North Winton Village neighborhood in the City of Rochester, Monroe County.
Proudly using Dynamic Headers by Nicasio WordPress Design